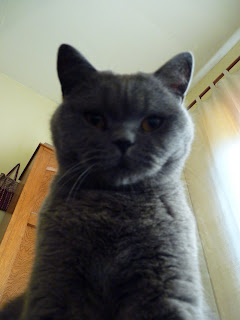 Last night my mum went out. She met some of her oldest friends at a bar. Then they went to another bar, then they tried to get into a restaurant but it was too busy, so they went back to the second bar, which mum says was good, cause she liked their pineapple Cosmopolitans. They ate there - Hummingbird it was called, and although nice the meals were teeny tiny and the girls were still hungry.

So they went to another bar. This one was called the Library, and was stacked full of old library books, and was a bit too cool for school. Still mum and her friends tried to look hip and just had desserts. These too were pricey and microscopic - oh well.

So when mum got home at 11pm, I was sitting on the step crying for her - like the little hungry orphan cat I am.

Then we went to bed and crashed out. Now she tells me she is off out again tonight.
Posted by Poppy Q at 4:07 PM