In the Paper Last Week - Titled THE FAMILY THAT SPEYS TOGETHER 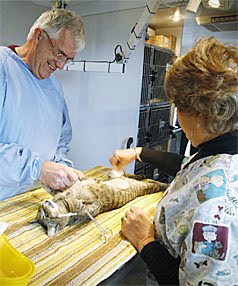 A Kiwi couple's de-sex life is keeping them together and on the move.

Alistar and Susan McKellow have rolled into New Plymouth in the SPCA mobile clinic.

They travel the country fixing cats and dogs, performing the simple surgery in a converted caravan.

Their marriage spans 37 years and 11,000 neutered and spayed animals, with Mrs McKellow assisting her husband as his vet nurse since 1972.

The de-sexing dream team spends three weeks of every month on the road, travelling all over New Zealand before heading home to Gisborne.

The animal-loving couple started working for the SPCA in 2006 after selling Mr McKellow's practice of 27 years.

The clinic was established by the SPCA to provide a free animal fixing service, because some owners couldn't afford it.

"Many of those animals wouldn't ever get to a vet. If we don't do it, people miss out," Mrs McKellow said.

It promoted the clinic's arrival through door knocking, leaflets and newspaper advertisements.
Kitten and puppy season starts in August and September, and the SPCA is hoping to reduce the number of unwanted animals it receives.

The clinic can even spay cats and dogs that have jumped the gun as it can also operate on pregnant pets to prevent more litters.

In addition to de-sexing, every animal that visits the clinic is microchipped and their information added to a database.

It is the second time the mobile clinic has visited New Plymouth and it is fully booked.
Mrs Poles Smith praised the work of the McKellows.
"They're making a real difference."

We give this awesome couple two paws up, for looking after lots of little sweeties all over New Zealand. Aren't some people just fabulous?
Posted by Poppy Q at 7:35 PM

Labels: The Family that speys together