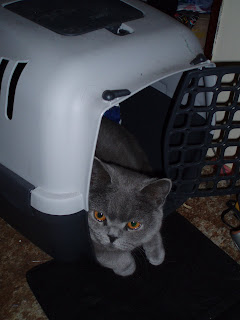 Mum left me alone a couple of night this weekend. I was ok - I just snoozed.

Saturday night she went to see a movie called "Venus" with peter O'toole. It was about an old geezer who falls in lust with his friends niece. There were a couple of rude words, but mum said she was pleasantly surprised. Also she thinks she might of been the youngest in the movie theatre - that doesn't happen often.

Last night she went to see Deb Webber who is a medium. She is on a show called "sensing murder", which mum loves to watch, about real life murder cases in New Zealand. The mediums ask the dead people to help solve their murders. 1/2 her live show is going round the audience and doing readings. The other 1/2 she answers questions from the audience. Mum has never been to something like that before. Deb said nice things about pets, they hang around you , just like your family and are waiting for you when you die. That's good - mum will love being in heaven as a cat lady.

Tonight is Guy Fawkes night - which means fireworks. Which means mum wants me inside, which means I won't come in at all. Keep safe kiwi, aussie and pommie cats who might be celebrating guy fawkes too.