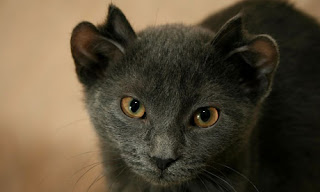 Yoda's owners fell in love with him after spotting him in a Chicago bar. Photograph: Barcroft Media
While all cats are said to have nine lives, very few are as unusual as Yoda, a two-year-old feline with four ears.
The animal's two extra flaps of skin behind his ears have astounded vets.
Valerie and Ted Rock, who spotted Yoda in a cage in a Chicago bar, adopted him as a kitten. The eight-week-old pet was one of the last remaining from a large litter and had yet to find a home.
They named him after the pointy-eared Star Wars character and took him to a local vet who said he'd never seen the condition before.
"We have spoken with other vets in our acquaintance, and they likewise had never encountered anything like this," said Valerie.
"We began to realise that we had something very special. As a result, he has been an indoor cat and has a chip installed in case he gets lost.
"Yoda is so different that we were concerned that he might be catnapped."
Multi-eared cats are rare, but not unheard of. In 2004, a six-month-old cat with two extra ears was put up for adoption at an animal shelter in Germany. In the same year, Russian media reported a kitten being born with seven ears.
Yoda's owners said he was a perfectly normal, affectionate, curious cat and a joy to have around. His extra ears, which are not thought to affect his hearing, are not attached to the base of his skull, with one placed slightly behind the other. They are believed to be the result of a genetic mutation.
I found this article at the Guardian Newspaper (UK) http://www.guardian.co.uk/world/2008/aug/20/usa.animalbehaviour
Poppy Q
Posted by Poppy Q at 1:26 PM