In our paper today 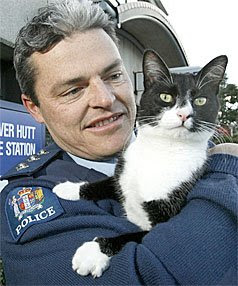 Is this the Missing cats bureau?

Police reckon something fishy is going on at their Lower Hutt headquarters.

For the second time in six weeks, a lost cat has simply wandered off the street and into the station.

After eight-month-old Jack left his Lower Hutt home on Wednesday, his owner hoped he would soon return. But he spent two days on the run, eventually strolling up to the front counter at the Lower Hutt police station about 7am yesterday 3 kilometres from home.
"We just heard this really loud crying sound. He was quite distressed when he walked in," police area commander Inspector Richard Chambers said.

A staff member went to the supermarket to get some food and milk for the cat, then found him a place to grab some much-needed sleep.
"Once he relaxed and had some food, he was very friendly. There were about six of us who wanted to take him home."

But no adoption was needed. An SPCA microchip implanted in Jack's neck when he was a kitten helped police and the SPCA reunite him with his owner a few hours later.

Tracy Dear said her three children had been in Hawke's Bay for the school holidays and did not know Jack had done a runner.
"I am very pleased he returned, otherwise I would have had three very upset children.

"It's not the first time he has gone missing. If he is home alone he often gets bored and goes looking for company."

In June, a two-year-old cat set out from his Mt Cook home in Wellington and spent two weeks making his way 20km north to eventually stroll into Lower Hutt police station.

Mr Chambers had no idea why cats seemed to be attracted to the station, but he would stock up on cat food in case there were more visitors. "We also might have to check there is no fish hidden somewhere in the station."