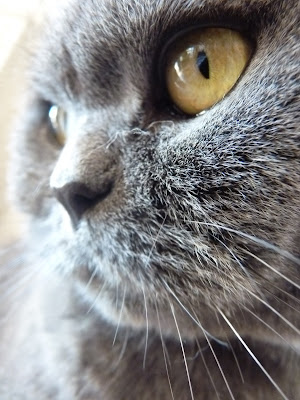 Caturday has rolled around again peeps.  Mum and I had a good old rest and even though she would have liked to hung around the hood with me, as the builder was back she decided to head out for the day.  A wander into town was in order, and then off to the movies with a mate.  They saw My Big Fat Greek Wedding 2 - which although was kind of sweet and did make mum smile it was really a tv movie and only a 2/5.

Mum ate out and had pork tacos which were nice, but not as nice as the time she previously had them when they had an awesome apple slaw with them.  Tasty but messy to eat.  When she got home 7pm, the builder was still going, but the light was fading fast so he was gone in another twenty minutes.  So I got my feast late, but enjoyed it and am ready for an early night.  Our nights continue to get cooler and darker, and mum says it won't be long before I abandon my cardboard apartment and head off and follow her to the bedroom.

Hope you all had a nice Caturday and did something fun.
Posted by Poppy Q at 8:48 PM