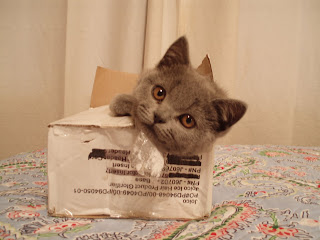 You know (or may not know) that the secratary entered this photo into the Cats in Boxes website which has photos of cats in boxes. Well I won the July cat of the month (just like playboy!! - except no centrefold or rude bits).

A couple of days ago they announced that I won - CUTEST CAT OF THE YEAR FOR 2007!!
http://catsinboxes.com/cat_awards/cutest_cat_of_the_year Sadly I was not their cat of the year, another handsome pussycat gets that award. Anyways these are the pictures from when I was an itty bitty kitty. 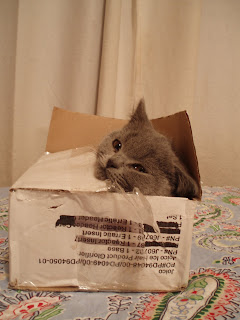 I didn't actually win anything either. I'm still waiting for mum to buy me my diamond crown and satin cross over your chest thing that says "Cutest cat of the year". 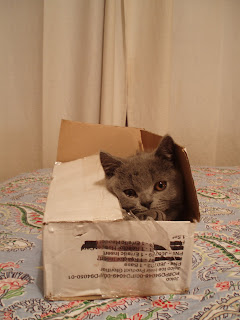 That's alright mum, I'll settle for a slice of ham. Now if only my mum could win, win Lotto that is.
Another sooper blogger Baby Mao - He won as well. He got Funniest cat of the year. You can go to his post at: I Was Cat of the Year! to read about it too.
Us cat bloggers, we is taking over the universe!!
Poppy Q

Labels: cats in boxes, Cutest cat of the year competition, I WON