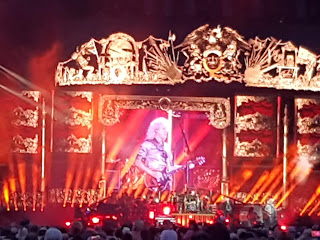 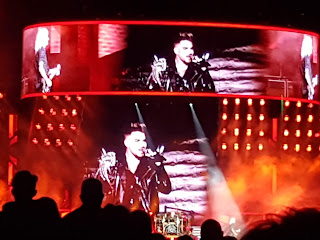 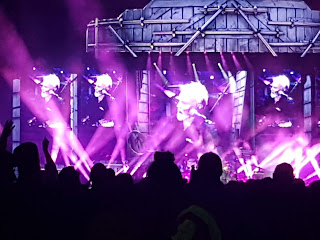 Mum had another big night out last night.  Queen with Adam Lambert were playing in our city.  The tickets were a bit pricey, but on Monday mum found some cheap tickets that were at the far end if the field, as far away from the stage as you could get and on the field with no cover.

Mum went with her good friends and their teenage kids and it was there first concert experience.  On Tuesday night it was stormy with rain and huge winds, and luckily by Weds afternoon it cleared up.

The show was pretty awesome with a great stage set up.  Mum and her friends only stayed in their seats 5 minutes after it started and rushed forward to a spot where they could see and dance and not be in anyone's way.  Although Adam Lambert is different to Freddie Mercury, he did a pretty good job and it was a old school rock concert.  There were about 4 songs mum didn't know, but the hits were great with everyone singing and dancing.

Mum loved Radio Gaga but it was hard not to be moved by Bohemian Rhapsody.  You can't beat the classics and there is something magical about a whole stadium singing along.  Kiwis are usually a quiet and shy audience, but even the all the men got their groove on.

The are playing Auckland next then off to Australia and mum would highly recommend  it if you live in Australia.
Posted by Poppy Q at 8:59 PM