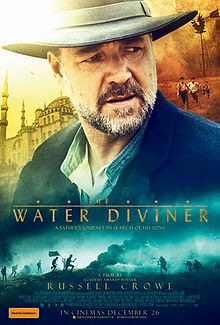 So mum was lucky, while so many kiwis were returning to work today after the holiday break , she still has a couple of days off.  Me and her had a lovely sleep in, then mum rushed to get the washing out on the line and some tidying up done.  The day was cloudy and it was beginning to spit with rain, so she decided to head out for a walk and go to the cinema.

So last week, she went to the middle aged movie theatre out of town, and today went to the one a bit closer to home.  When she got her ticket for The Water Diviner it appeared that mum would be the only one in the little cinema, however just as the movie started she was joined by a couple.  It was a good movie, a good solid story about a father who goes in search of his three sons, who he believes were killed in Turkey in the first world war.  Nothing wrong with a bit of Russell Crowe we say.  Middle aged ladies like a bit of a rugged handsome middle aged Aussie bloke.

I was lucky enough to be able to travel around Turkey twenty years ago, and like most Aussies and Kiwis a friend and I made the trip to Gallipoli to have a tour round.  It is an interesting place to visit, a beautiful and  isolated small part of the coastline with high cliffs.  To visit the war graves was profoundly moving, to see the graves of so many of our young men buried so far from home.  For the Turks, a sacred site for so many of their own war dead, and they do a great service looking after the area and showing us round.

Mum must admit to having a few tears in the cinema, and just as the movie was coming to an end, the screen went blank and the movie stopped.  So mum waited a couple of minutes, rubbed her cheeks, in case the tears had smudged her eyes and  then went out to let the young guys know who were in charge.  To their credit they came in and apologised and offered hot drinks.  Mum doesn't drink hot drinks, but they bought some in for the couple and they also gave them all free tickets for another show. They then played the movie, and mum thinks they only missed a minute or two of the show.  Great service from them though.  So maybe another movie tomorrow -  a real mini film festival!!
Posted by Poppy Q at 9:27 PM