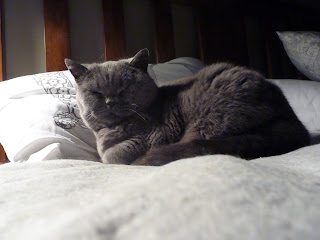 Last night mum and her bestie went out on a little adventure.  They headed out to Lower Hutt, to see a show (Kelvin Cruikshank the psychic).  It turned into a little bit of a grand adventure.  Mum and her bestie were a bit early and thought they would go and have a sneaky little takeaway burger, but the burger shop had disappeared from where it used to be.  Mum thinks it had probably been gone a couple of years, but she is seldom  on this part of the suburbs.  They trekked to the local mall and had a nasty cheap burger and then headed to their show.

The show was ok.  Kelvin was entertaining and came off as a nice guy, much like many of the books that he has written and the girls were glad that they went. They thought though that he did a lot of explaining, and although his readings were good, he only talked to about five people in the three hour show.  Very interesting.

On the way home up a busy street, there was a man wandering onto the road in front of cars lining up beer bottles, a large rubbish bin and blanket.  Mums bestie pulled over, and mum got out to get the stuff off the road, so there wasn't an accident.  The man was quite disturbed, but mum told him that he couldn't do that, he would get hurt or cause an accident.  Another lady had pulled her car over too to try and clear the scene - notice that no men got out to help out - typical.  After a couple of minutes a lone policeman turned up, but the guy had disappeared into a local highschool.    Drama.  Junk food, a show and a crazy man - a big night out for the mumster.

So the mum slept well, and went and had a big old day at work.  But work is over now and she is mine - all mine!!!!  Have a great weekend everybuddy.
Posted by Poppy Q at 7:51 PM