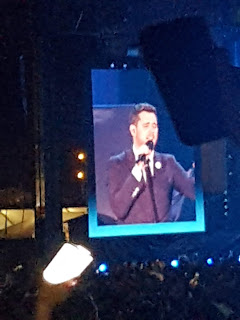 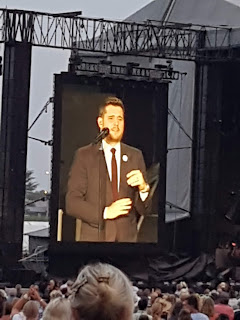 Mum and I are back.  I had to go to the Cattery while mum and her beasties went away to see Michael Buble.  Boy It was HOT - it was 35 day C when they arrived.  Mum even went into the water up to her knees to cool off, she was surprised at how chilly the sea was.  The girls had an ice cream that melted super quick, but it makes you feel like summer to eat a waffle cone on the beach.

The concert was great.  They got there a few hours before as it was held out in an outdoor winery and although you could take good and drink you could not take any alcohol in.  The lines were short for food and drinks and not too long for the portaloo not too horrendous and when mum went, it was clean and smelt ok, but was on a bit if a scary lean.  Luckily there was a breeze and a doable 27 deg C.  Lots of cold wine and iceblocks helped keeping the girls chilled.

Michael Buble played with a 36 piece orchestra and he was amazing.  His singing was awesome - he sounds even better live than on CD and mum knew a lot if his tunes.  She loves artists who sound so wonderful live -  she has been lucky and got to see so many great artists Billy Joel, David Bowie, Sting, Rid Stewart, Bob Dylan , Van Morrison and Adele.

Her weekend was full of eating out  and shopping.  The day they left it made it to 37 deg C - the hottest day on record ever.  The best part though is getting home and picking me up from the Cattery.  Our city us a lot cooler, our cut has had weeks of overcast misty days.  It feels like summer has not arrived for us.  Still at least we have lots of green gardens here, while the rest if the country looks parched with drought.
Posted by Poppy Q at 11:12 PM