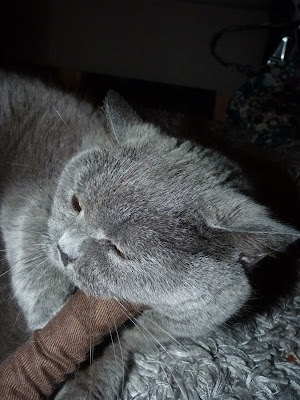 Hey kitties it is Caturday and I'm still rocking the turd toy.  The mumster woke up at a leisurely time this morning to find the little city drenched in sunshine.  So after a quick shower and a banana breakfast, she got herself dressed and walked into the city to meet miss Belle.  They caught up and bought sushi for lunch, and some cronuts, although you are not allowed to call them cronuts anymore - apparently the political correctness police say that cronut is trademarked and they are called french doughnuts.  In reality a big old doughnut/croissant mix filled with custardy goodness.

The girls went down by the sunny waterfront and ate their lunch, then went off for a walk.  Mum dropped off books at the library, and did a few jobs for the niece.  Mum then trekked off to the burbs to meet a bestie.  They went to the cinema to see Amy - the documentry about Amy Winehouse which mum enjoyed a lot, even though it was confronting to watch.  A cheap Asian stirfry dinner, then mum headed back to the city, via the supermarket for some supplies and finally home to feed me at 9pm - and now I have headed off to bed, while mum sits on the couch and catches up on some shows (shameless season 5).

So after a busy old Caturday we are looking forward to a more relaxing morning tomorrow.
Posted by Poppy Q at 10:34 PM