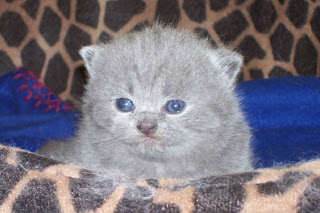 Well mum was so busy looking at the blogs tonight she has made the house all stinky by burning the potatoes. I am grumpy about the smell and it is going to be ages before the steak is ready!! Actually I am not too keen on human food - I will play with my bit of steak for a while and come back and eat it an hour later. Then when I go and ask mum for more, she has eaten it all up!! Greedy girl. I will however make her share margarine,cheescake or icecream - yummm!!!

So while the second batch are cooking, we thought we would tell you a bit about coming to my forever home.

I was one of at least 50 kittens born at a cattery here in New Zealand and I was the bravest and the first to leave to go home with my human. I had 5 brothers and a sister. It was fun there and we shared our room with another 6 half brothers and sisters. My mum came and met me for a pat when I was only four weeks old. She had already picked out my name so Poppy is what I was called. Nobody else had a name but me!!!

Now mum knows that some fantastic cats come from the SPCA and cat shelters. In fact all the other family cats have been adopted this way. We will tell you their stories later as well as the story of Puss angel mums last cat. Puss died last year and mums heart was a bit broken as Puss was her buddy and such a good cat. She happened to look on the internet and found the wee cattery that I was born at. The best thing about it was the breeder Anna who looked after us was a vet nurse. She was also very friendly and kept mum up to date with photos of the kittens. Mum had always like the idea of having a British Blue and as mum has now entered middle age (just kidding) ,she thought now would be the best time to get a dream cat!!!

It took two hours to get home in the car but I didn't cry much. When I got into the house though I was a bit scared and run and hid under the couch. Mum just let me explore slowly and kept me in just the lounge for the first week. I had come home on the 30th of December and although it is summer time then in New Zealand, we had hit a cold patch. But that was ok as mum put the heater on and gave me a cuddly kitten igloo to sleep in.

I ws brave and sat near mum and listened to her. Later she convinced me to snuggle up on her and I had an exhausted sleep. 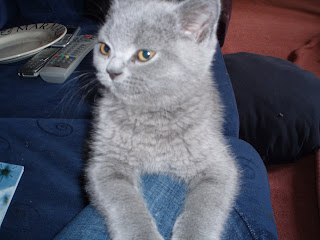 Mum says I have been a good kitten and known what my dirt box was for since I arrived. Now at six months old I am good and use my cat door and run outside and go in the garden!! Not so nice in winter but I have managed to not have any accidents yet (not that mum has found).