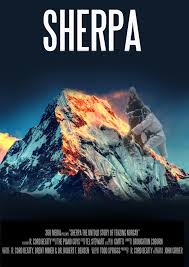 Aww lucky old mum has a few days off that coincide with the capital cities International Film Festival.  So the alarm is switched from the usual 6am start to a later hour, and the uniform is tucked away with casual clothes cleaned all ready to go.  Oh and because she is tight with the funds and won't pay crazy cinema prices,  a plastic container with some snack crackers was packed into her handbag. She also had some spare time and dashed into a little gift shop she hasn't visited in ages and managed to try on some perfume that made her smell like an old ladies linen drawer all day.  Then off to the movies!!

The first movie was an amazing documentary called Sherpa - about the Sherpas working on Mt Everest assisting the climbing teams who are trying to make an assault on this beautiful mountain.  The scenery was spectacular, giving you views of the mountain that I had never seen before.  It was a compelling insight into the vast money making industry the mountain climbing had become, giving the government a large amount of money and providing wages and jobs for the people of Nepal.  But dangerous, oh my goodness what they went through was scary, climbing over steep dangerous areas of ice in the dark on flimsy ladders, carrying gear the size of a fridge.  A big mumster 5/5.

Then mum went to see a movie called Phoenix - a German story about a woman who after leaving the camps, seeks out her husband.  After severe facial injuries, he doesn't recognize her but thinks she will be a convincing fill in, to make the bank believe she has returned to get access to her money.  All a big odd, as surely you would think he would have figured it out.  I wasn't convinced, and must admit to nodding off at several points during the movie.  So a sleepy 2/5

Mum then was going to meet a bestie for the last movie, so they dashed to a restaurant for a quick lemon/lime/bitters, some summer rolls, chicken satays and wontons.  A quick toilet stop and then back to the cinema for number 3.  This one was a documentary about Peggy Guggenheim and her life as an art collector.  What a fabulous eccentric lady she was especially as she got older.  Born to parents who came from wealthy families, her life was changed by the tragedy surrounding her.  Her father died on the titanic when she was just 13, leading to her having a breakdown as a teenager.  One sister died in childbirth and the other lost the plot entirely. As a young woman she headed to London where she set up first an influential art gallery then a museum, before heading to Paris before the second world war to hunt down modern art, which is a big nerve racking when you are a Jewish woman working alone.  Heading back to New York, she exhibits more of her modern art and becomes ensconced in the art scene.  Releasing a rather racy autobiography describing her many lovers leads her to leave in the 1950s and head to Venice where she again opens another museum of modern art.  An entertaining 4/5.

Then - just when you might think the evening was over oh no it wasn't, mum headed off to the supermarket to get some supplies for the week ahead and lots of biscuits for me.  Oh yeah!!
Posted by Poppy Q at 9:45 PM