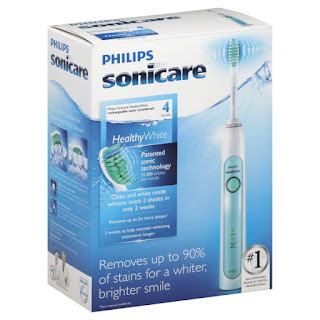 Last night at one of the talks mum went to, was sponsored by Phillips as they produce a range of health care items.  One of mums friends was giving a talk, and he sat next to mum for a while.  They then moved him to the aisle seat so he could get up onto the stage quickly.  After his entertaining talk, they gave him a gift of one of these fabulous toothbrushes as a thank you gift, and then they said there was a floor prize.  If you looked under your seat there would be one chair with a business card under it.

Mum searched her chair, and found nothing, but they couldn't figure out who had one.  The guy who hid it then pointe to mums row.  Turns out her shorty arms couldn't reach under far enough, and she won the prize.  The funniest thing was because her friend had been sitting there he may have ended up with the two toothbrushes.

Yippee for mum - it has been ages since she won anything, so she was very lucky.  Better buy a lotto ticket, she might be really lucky this weekend.
Posted by Poppy Q at 10:07 PM