Try Something New Thursday - The Facial 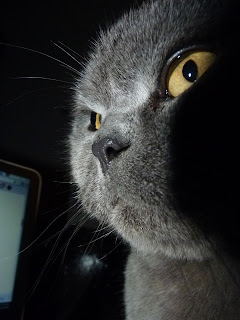 So everything has been a bit same same for me and mum lately, so she decided it is time to try to do something new.  So today (well yesterday actually), she had some time to spare, so she decided to book herself a facial and some tweezering of brows and an eyelash tint.  It was a nice day and so she got to have a wander round town before booking arriving early for her appointment.

As soon as she arrived it seemed she could do nothing right.  Arriving early, mum felt they were a little annoyed as the technician must have been at lunch.  Mum was more than happy to stare at a magazine while she waited - she would much rather be early then late.  Mum thought she had good skin, but apparently the cleanser and moisturizer she uses was wrong, and skin that mum thought was good was dry and over sensitized. The waxing was fine, the tinting of lashes was a bit odd.  Mum says it was surprisingly hard to stay with your eyes closed for ten minutes (I can keep my eyes closed for ages - easy).

Then she had a face mask put on that had oatmeal in it which smelled like stale porridge and made mum want to hurl a little bit.  Her skin did feel better when she left and with promises to keep up the new skin regime she even rebooked for another appointment in a months time to see if the new skin care works.

So mum was glad to have tried something new with her week.  How about you - do you want to try anything new?