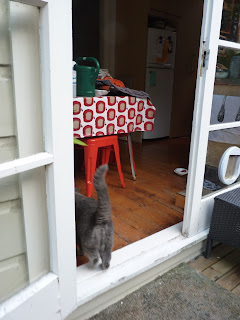 Last night mum was at work for lot of hours, which I enjoyed.  It was a summer night and warm so  I stayed playing in the garden all night waiting for her.  I am exhausted today, and have been napping with mum.

Mum had good intentions of going and get some jobs done, and going to the movies to see Lincoln.  She decided that instead of spending money at the movies, she would watch a movie that she had got from the library on DVD.  Movies at the cinema are about $16 here, and for that she can watch four movies from the library. She watched The Grey, as she likes Liam Neeson, about a group of works stranded in Alaska after a plane crash.  Her verdict was it was a good 4/5 watch, but very grim and lots of violence.

She thought she might get a takeaway burger for dinner, but instead she has put some fish and hash browns in the oven and is cooking some broccoli.  She had all those things in the fridge/freezer , so is a much better and healthier option.

Tomorrow she gets paid, and has birthday and leaving presents to get and bills to be paid, so mum is going to have to be careful with her dollars this month.  She is going out for dinner on Saturday night and might get lunch out tomorrow, so that is enough treats for the week.
Posted by Poppy Q at 7:23 PM