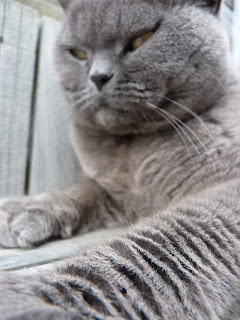 Mum had a bit of a slow old Sunday today, feeling a bit better she went to meet a friend for lunch, although lunch itself was a bit of a disappointment.  She ordered the steak with potato done 3 ways and the rocket salad.  It was the priciest item on the menu and she was looking forward to something tasty.  The steak was small - about the size of a deck of cards - which we know is the size that nutritionists would recommend.  The potatoes well they were odd and mum does like a potato.  There was a round of cold mashed potatoes that seemed to be mixed with cashew nuts and herbs, they were topped by some crispy strings of fried potato (also cold) and then topped by a lukewarm foam that mum could only guess was potato as well.  All kind of odd, and although it was all ok - it just seemed a bit of poncing about and she would have preferred a bit more simplicity and hotness.

So once finished she then wandered through the city to the library to return some books.  The streets were quiet, as the roads outside the library were closed off to film Scarlet Johanssens new movie - no celebrities were seen however as the screens were pretty tall and surrounded by security.

Mum then filled up with a fresh fruit juice and took the bus home - just in time to take a nap and plan for an early night.  Middle aged ladyship is such fun.  Me - well I was outside on my deck and am taking it easy all the time.
Posted by Poppy Q at 8:50 PM