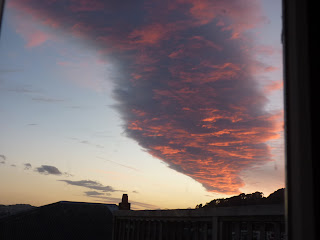 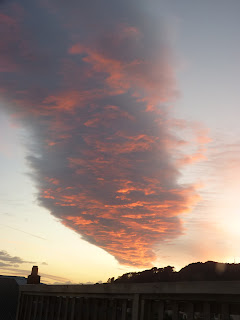 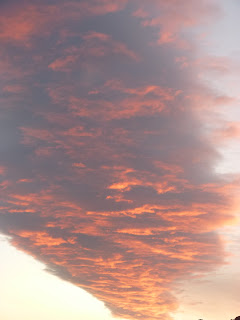 This morning, mum was up early again today and caught this one big cloud that was nice and rosy.  It was mums day off work, but she had to be up early as she had to catch a plane.  She was flying up to Napier to visit her brother and go to the lawyers to do some signing of papers, and it would be easier and quicker to get it done up there.  Mum and her brother  laughed when they had to swear with their hands on a bible that they were who they said they were and that the documents they signed were all true (this was to do with their dads estate - they were not in trouble!!!).  Being not religious at all, it did seem odd to have to do place your hand on a bible, a somewhat old fashioned practice that doesn't seem to fit in todays pc world.

So mum and her brother grabbed some lunch, and enjoyed the afternoon sun.  Mum searched through the family photos, as she is going to scan some in for the family.  Then it was time for the flight back.  A bit bumpy each way, and it was nice for her to get home to me, just in time for feast time.
Posted by Poppy Q at 7:57 PM