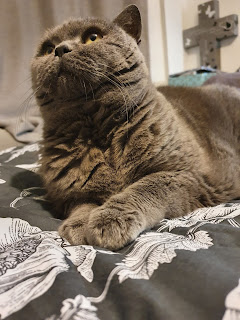 Hi Caturday  friends.  It is wintery but mild with occasional  rain.  Mum has only left the house to put small  scraps out for the birds.  She has been moping  feeling  sorry for herself today.  Sore shoulder, with some toothache  and now a sniffling  cold - a trifecta of  uncomfortableness.  She did well to have a shower and get dressed and do some washing and a few small  chores.

Mum is spending  the evening watching  a Netflix documentary  called Lenox Hill, following  four doctors  at a New York  Hospital.  It is the show that is the talk of the tearoom at work, something  that has not happened  for years.  So having little sleep has its bonuses  more time for shows and snuggles  with me.