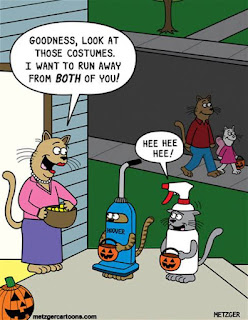 Halloween isn't really a thing here in New Zealand,  although social media seems to be having more influence especially on the kids.  Saying that, mum did win a costume parade at school when she was eight wearing a witches costume her parents made her.  She had a black cat then, Andy cat who would follow mum everywhere when she wore it round the house.
So tonight mum is watching It in the dark.  She has seen it before,  so isn't too scared.  She might even make it a double feature scary movie night.  Who needs sleep?
Posted by Poppy Q at 8:58 PM