Scent of a Cat 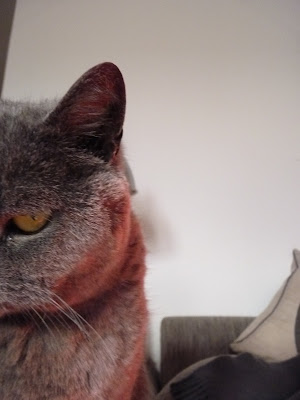 So today mum started work at 7am early, which meant a 5am alarm clock call.  Last night was the first night all year that I have marched into the bedroom to sit on her all night.  So she slept well.

So she finished her work at 3pm, and to loosen up her hips and knees, that she says were all kinked up after sleeping in one position all night, mum went for a little old walk.  She wishes she had taken her camera, as the twilight light was just lovely, and the waves were high and the water full of surfers rugged up in thick winter wetsuits.

Mum went looking for slippers that she did not find in her size, so bought a hot water bottle for me she says (say what???), and a tshirt.  Then she got some groceries.  A little peri peri chicken for her with some potato salad for her and a feast was fixed for me.

While walking back along the beach a lovely little airdale terrier came running up to mum.  Mum gave him a pat and told him to go back to his mum.  His mum called out and said that he never goes to anyone - did mum know him.  Turns out mum knew his aunty who was there, but had never met him.  Then she asked if mum had a cat.  The thing is that he can sniff cat smells out from anywhere.  Mum thought she was the dog whisperer.  Turns out, I have imparted my scent on mum.  As soon as she got home, the jeans were going in the wash.  (all that hard work rubbing up against her, and I am just going to have to start all over again).

Labels: Scent of a Cat